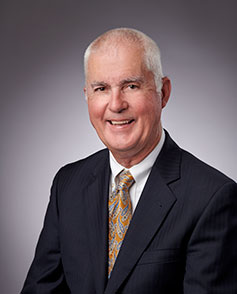 Mike Sterkel, a Guthrie, Oklahoma native, received his B.S. in Industrial Engineering from Oklahoma State University in 1973 and his M.B.A from the University of Tulsa in 1976. Sterkel started his banking career working in various operational and lending positions at the First National Bank of Oklahoma City from 1979 until 1996. From there, he assisted in raising $65,000,000 to form a multi-bank holding company, Country Banc Holding, which acquired 12 community banks in western Oklahoma and Southwest Kansas and served as CEO until 2001 when Country Banc Holding was sold to Gold Banc. In 2005, Olney Bancshares acquired the remaining Oklahoma Gold Banc locations and formed Rose Rock Bank, an Oklahoma chartered Fed member de novo bank. Sterkel served as CEO of Rose Rock Bank until its consolidation with Olney Bancshares in 2010 to form InterBank. Today, he manages all Oklahoma InterBank locations and serves as Senior Lender for the company.

Sterkel has served as the treasurer for Catholic Charities since 2018. He was a member of Class I of Leadership Oklahoma City and previously served as the chairman of the Oklahoma City Catholic Archdiocese Finance Council from 2004-2018. His hobbies include golf and watching St. Louis Cardinal Baseball.